Chicago corn price jumps by 3% to highest since last autumn as maize, soybean and wheat yields also suffer due to drought. 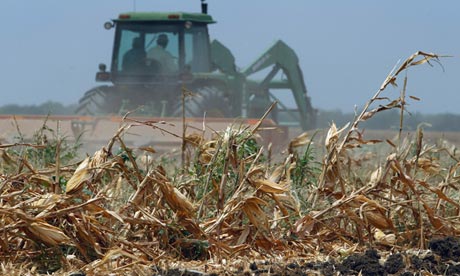 Corn crops in the US are failing due to a prolonged drought in the Midwest. The low yield is pushing up food prices across the globe. Photograph: Eric Gay/AP

Fears that food prices will rocket at the end of the year after a poor US harvest were heightened after predictions that a drought across the Midwest will to continue for at least another week.

Maize yields are suffering after a long drought that hurt the crop in its crucial pollination phase, experts said, as the price of Chicago new-crop corn jumped more than 3% to its highest since last autumn.

Soybean crops and the crucial wheat harvest are also expected to suffer in the blistering heat, which has stayed in the high 30s centigrade for much of the last few months. A repeat of the drought in 2010 in another crucial wheat producing country, Russia, which saw food prices rise in the UK, is likely to make the situation worse, while soybean producers Brazil and Argentina have also suffered poor weather.

http://www.guardian.co.uk/business/2012/jul/02/food-prices-rocket-u...
If you have the resources to get food stores you should do so now. Instead of going out to eat, buy supplies to feed your family in later days when the prices are to great to pay. You may receive some flack from your family now but you will be praised later when the others are doing without.
Food is going to be scarce, supplies are going to be harder to get than you can even imagine.
Prepare now!

All of the stuff reported on this page by each one of us is true.

The storing of grain, the shipping to other countries, the fact that the crops are burning up and not producing in certain regions, the rising prices of commodities, the statement that the government is hiding the fact that there are stores that have not even been tapped yet is also true.

This does not detract from the reality that stores are going to be increasingly hard to come by. The price will rise because the government has a agenda to carry out.

This agenda is not for the betterment of the people, it is to support their progress.

This agenda is that half of the worlds population is to be done away with. To die.

Fact, look it up.

In this process millions will die, this is fact. Do not let it be you because you were to late to take action!

didn't they burn crops during the depression .. this stuff is all preventable we live in the 21st century i do not believe there isn't ways `to save food for people ~ i hate the useless government ~~ stop spending money on wars~~ i need more freeze dried `food too ;)

went and looked @ the local corn today, its all true, its nothing there, went to 400 acres today. 1st ear i pulled apart, there were 3 lil niblets on the whole cob. 2nd ear, different stalk, about 4 lil niblets, 3rd ear, different stalk, was fully occupied....but micro,shriveled niblets. Then in a different field, there were stalks & stalks......not a ear of corn on 'em. There were a few fun, bite-size mini ears, but looked too comical to eat........not lookin good in ol Virginny folks :(

You know something?...I know a man who works in North Dakota for a Farmer...He has a Giant ranch composing over 1 million acres...This notion that grain is scarce is bs...If properly Dried Corn,wheat,soybeans lasts yrs.They have had corn stored in bins that has not went to market yet in 3 yrs and I am talking a massive amount of grain and he is one farmer.Sure droughts hurt after all they are creating them.But to think food at this point is in short supply is hogwash.It is a scare tactic to drive up price and starve ppl.Our grain is being Shipped overseas to feed the commies.

I am doing some myself, Vincent.

Mr. Sizzle commented on Boris's page 12160 Administrators
"I’m not able to log out or post anything. Any advice?"
2 hours ago

Doc Vega replied to MAC's discussion ARMED CIVILIANS FIGHTING BACK as Leftists Call to DEFUND POLICE!!!
"If the chickenshits in office won't protect us then it comes down to the people defending…"
9 hours ago

"Great video link Mr Siz. It's really good to see amazing people like him speak out. He's…"
13 hours ago

"So true CS. Protest, looting, death and destruction called for when a bad white cop kills a black…"
13 hours ago