Figures show that British scientists have created more than three million human embryos by IVF since 1991. Their excuse for carrying-out such research is that Scientists say the techniques can be used to develop embryonic stem cells which can be used to treat a range of incurable illnesses, though there’s no mention of a "super-race" or cloning human’s passé.

Though come-off-it as immortality has long been man’s goal and achievement.  It’s strongly believed-in and practiced by such cults as the Freemason’s; the ‘Raising of the Lions’ Paw’ - dates back to as far as Solomon’s temple and a time when they probably knew all about how to manipulate the human DNA. Princess Diana in the grounds of Government House in Auckland, New Zealand with her son Prince William, April 1983. (Getty Images)

Three labs in the UK – at King’s College London, Newcastle University and Warwick University – were granted licences to carry out human-animal hybrid research after the Act was made law.   It was then alleged these places have now stopped creating human-animal hybrid embryos due to a lack of funding.  Yet scientists believe that there will be more such work in the future – and they are dead-right!  I can only imagine what's taking place in private laboratories.

You’ve seen how pathetically people have queued-up around the block for the latest video game, i-player or tablet, then can you imagine how long the queue would be if they could purchase a kit to produce a “mini-me” or replica of themselves!! 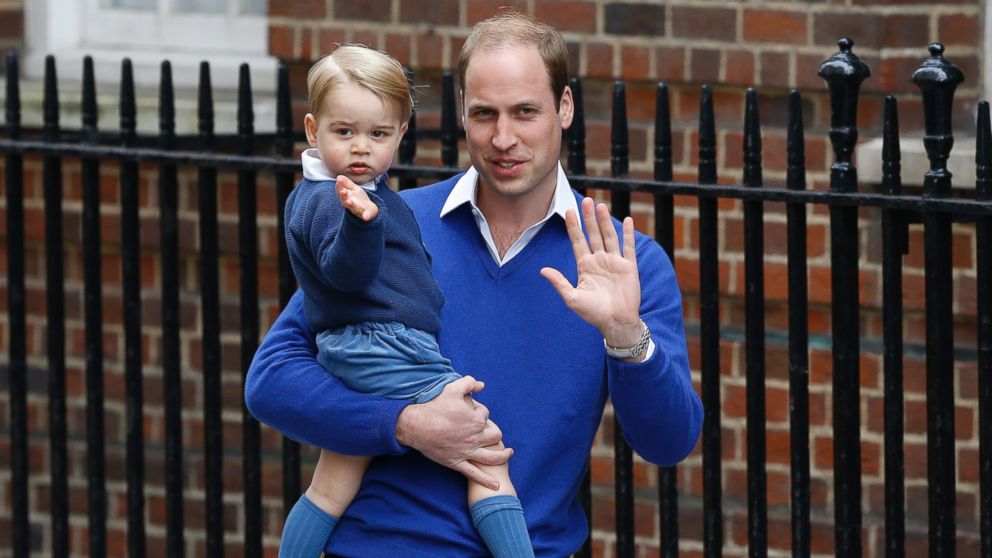 This is why I and others believe Prince William was cloned at birth and in addition his DNA preserved and so as it can be used as and when; such as when he and his Queen-to-be wished to have an heir to the throne – and in this case baby George who arguably is the “spit of his father” - and we all know that one of the best samples of DNA is obtained from our saliva.

The “real elite” never show their hand or face and if they ever do you will never know who they really are. Most people don’t even know their own descendants outside their immediate families.  Mind control is another technique used and so as you can easily “program” not only the “original” person, you can do so again with their clone/s.

Look, if you are a multi-billionaire and have the opportunity to obtain immortality, then it goes without saying you’d very much be interested in such an idea.  In addition, look at some of the events, places and people such as celebrities and especially members of the royal family have to attend and meet.  It must be a pain in the ass and if someone could stand in and do it all for you whilst you remained home or on a secret island in paradise then surely it goes without saying you’d probably be insane to not want a double or even treble of yourself!

To be perfectly honest with you; I’m 55yrs old and now have all types of aches and excruciating pains and that were I in the position to have another one of myself to do all the donkeywork, then I’m sure I’d think twice about it.  Organs; new hearts, kidneys and livers are other prime examples and reasons clones are being created, purchased and used by the elites.

Cloning is totally legal in the USA and many other countries in the world as is it to sell cloned animal meat into the human food chain.  It's currently illegal in Europe though further lobbyists for the conglomerates are pushing for the law to be changed and so some companies will be able to sell McDolly's.

We have cloned animals like Dolly the Sheep being the first animal to be cloned in 1997; though there are now millions of sheep, cattle and pigs among many other species that have been cloned to date; Camel, Carp, Cat, Cattle, Deer, Dog, Ferret, Frog (tadpole), Fruit Flies, Gaur, Goat, Horse, Mice, Mouflon, Mule, Pig, Pyrenean ibex, Rabbit, Rat, Rhesus Monkey, Sheep, Water Buffalo, Wolf

Contrary to public belief, there are no federal laws which ban 'human cloning' completely in the USA, and it’s said any such laws would raise difficult Constitutional questions similar to the issues raised by abortion. Thirteen American states (Arkansas, California, Connecticut, Iowa, Indiana, Massachusetts, Maryland, Michigan, North Dakota, New Jersey, Rhode Island, South Dakota, Virginia) ban reproductive cloning, and three states (Arizona, Maryland, Missouri) prohibit use of public funds for such activities, so we can safely assume it would be private money being used, so they can now sell twice or three times the amount of cheese burgers - to the 'same' person!

The papers for the joint research project were signed on Tuesday by Hwang Woo-Suk, chief technology officer for South Korea's Sooam Biotech Research Foundation; and Vasily Vasiliev, vice director of Russia's North-Eastern Federal University, during a ceremony at Hwang's office in Seoul.

Hwang is infamous for his role in human embryonic stem-cell research: In 2004 and 2005, he and his colleagues claimed to have extracted stem cells from what they characterised as the world's first cloned human embryos. But in late 2005, his work was found to have been based on fabricated data, and he was barred from continuing research with human cells.

Despite the disgrace, Hwang continued working with animal cloning techniques. Before the scandal broke, his team announced that they produced the world's first cloned dog, nicknamed Snuppy, and that claim has stood up to scrutiny. Last October, Hwang's team at Sooam unveiled eight cloned coyotes that had been produced by injecting nuclei from coyote skin cells into dog eggs. At the time, he said he was interested in cloning an endangered African dog species known as the lycaon ... and was interested in cloning a mammoth, too.

In December, Japanese news media said that scientists recovered a seemingly viable sample of bone marrow from a frozen mammoth thigh bone in Russia's Sakha Republic, and that a mammoth could be cloned back from extinction within five years. This week, Agence France-Presse reported that North-Eastern Federal University is working with the Japanese scientists and with the Koreans. The Beijing Genomics Institute is said to be taking part in the Korean-Russian project as well.

Reports from Seoul suggest that the mammoth-cloning effort could be launched this year if the Russians can ship the remains to Sooam's laboratory. "The first and hardest mission is to restore mammoth cells," a colleague of Hwang's at Sooam, Hwang In-Sung, told AFP.

The military have had to develop a “Super Strength Soldier”, humans are too costly and fragile. The Battle of the Somme was one of the largest battles of the war; by the time fighting paused in late autumn 1916 the forces involved had suffered more than 1,000,000 casualties, making it one of the bloodiest military operations ever recorded.  It left the British public’s stomach for fighting, not quite having the same appetite for war, perhaps they might have had prior it.  No one likes to lose their loved ones.

WWI yielded a total number of military and civilian deaths over 35 million. There were over 15 million deaths and 20 million wounded ranking it among the deadliest conflicts in human history.  The total number of deaths includes about 10 million military personnel and about 7 million civilians. The Entente Powers (also known as the Allies) lost about 6.0 million soldiers while the Central Powers lost about 4.0 million.

In the deadliest conflicts in human history, WWII has to date, yielded over 60 million people deaths, which was over 2.5% of the world population.  Out of this figure there were well over 45,000,000 military deaths alone.

Human clones exist, as do human-animal hybrids (Werewolves’ being just one) and the trans-humanisation of androids and mainly for the use of Super-Soldiers.

Nano-nano – we are electric – you have been inform.

Great pics, for sure as I believe there are all sorts of "folks" also conducting their own experiments - "farmers" and animal breeders are among them; our "governments - "experiments" are more safely guarded, though who knows as they too can escape??? I believe that all these story's you here from all over, like "Mothman", The Flatwoods Monster, Goatman, Chupacabra and such are things that were created in labs, either escaped or let lose on purpose

Phyllis Maka commented on Phyllis Maka's blog post YES! KICK EM OFF EARTH--NO OTHER WAY! THEY ARE LITERALLY THE COVID PARASITES!
"You won't need to worry about these posts from Jim Stone there after since google is taking…"
1 hour ago

Phyllis Maka commented on Phyllis Maka's blog post YES! KICK EM OFF EARTH--NO OTHER WAY! THEY ARE LITERALLY THE COVID PARASITES!
"Jim Stone -  They are accelerating the shutdown of alt media sites. Just because you can…"
6 hours ago

Mr. Sizzle commented on Phyllis Maka's blog post YES! KICK EM OFF EARTH--NO OTHER WAY! THEY ARE LITERALLY THE COVID PARASITES!
"Hey Phyliss.  Let’s make a bunch of shirts that say, “It’s ok to like Jim…"
7 hours ago

Phyllis Maka commented on Phyllis Maka's blog post YES! KICK EM OFF EARTH--NO OTHER WAY! THEY ARE LITERALLY THE COVID PARASITES!
"Yesss Local gun shop owners need to be deputised also, see how that sticks up their graw!"
7 hours ago

Mr. Sizzle commented on Phyllis Maka's blog post YES! KICK EM OFF EARTH--NO OTHER WAY! THEY ARE LITERALLY THE COVID PARASITES!
"Well it turns out a local gun shop is offering them a FREE…"
9 hours ago