Those were the words uttered by Orlando police officer Peter Delio, after kneeing a non-resisting handcuffed suspect in the stomach so hard he rupturing his spleen.

As this newly released video shows, the only "resistance" 40-year-old Robert Liese could have put up was the resistance his abdominal muscles showed when faced with an unprovoked pounding.

Officer Delio had already cost the city $15,000 in a previous settlement after illegally seizing a man's cell phone for videotaping an arrest.

Evidently, he was given a "second chance" and not fired for his misconduct.

Now, he's the subject of another lawsuit seeking over $75,000 in damages for excessive force and civil rights violations.

Watch a video report on the assault courtesy of the Orlando Sentinel: 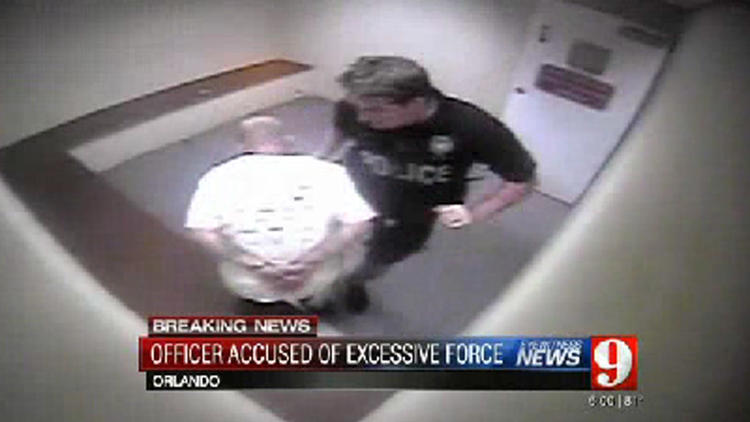 Video shows an Orlando Police Department officer knee a handcuffed suspect in the stomach in this WFTV report.
By Desiree Stennett
http://www.orlandosentinel.com/news/breaking-news/os-peter-delio-po...
contact the reporter

According to a complaint filed on Nov. 3, Liese underwent surgery to have his spleen removed after Orlando police officer Peter Delio struck him so hard in the abdomen that the organ ruptured and stomach tissue was torn.

Liese is seeking more than $75,000 in damages after Delio violated his civil rights and used excessive force, the lawsuit said.

These people are being hired on purpose.  The police departments are run by corrupt people who are being paid to destroy America.  They hire sociopaths, give them guns and badges, and encourage them to engage in violence against the public.  This has the effect of instilling fear and compliance in the public.  This is conditioning training.  And it also serves to bankrupt police departments as they are forced to cover these lawsuits.  This reinforces the practice of hiring idiots and thugs because nobody who was responsible and viewed the job as being a protector of society could put up with the lousy pay and risk to life and limb.  But low-IQ bully thug sociopaths put up with it, because they get off on the power.

And none of this is by accident.  It was not market forces.  It was not the result of social pressures.  This was done intentionally by those-who-would-be-our-masters.

One potential action we could take against these thug cops would be to carry squirt guns with us at all times.  When we see a thug with a badge bullying, hurting or trying to kill one of our fellow citizens, we squirt them in the head the way you do to your cat if it jumped on the sofa.

I realize that this is not a good idea for the individual who squirts the cop.  I am fully aware that these people would be setting themselves up as a target for the rage and violence of the out of control adult children with guns and badges.  But I also feel that it would work.  It would take MASSIVE numbers of citizens following suit.  And it would take total Gandhi level pacifism.  And it would take years and would result in a lot of deaths and injuries.  But I honestly believe that it could succeed.  The alternative is to wait and eventually mobs will form, the worst elements of society will join those mobs, police will be killed and the majority of this nations police force will go on lock down and refuse to do their actual jobs.  (They aren't exactly doing their jobs now.)  Cities will burn.  Violence will break out in America.  Good people will stay home and the worst of humanity will make use of the opportunity afforded them and the country will fall.

I see it as plain as plain.  I have zero doubt.  I see it like I am watching a movie that I have seen before.  I know what is coming because it has happened before.  It keeps happening.  History repeats.  And good people die.