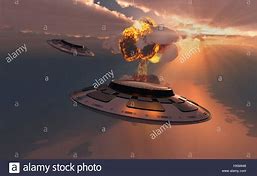 In 1947 the Roswell Incident was dismissed as the discovery of a weather balloon on Mac Brazel’s ranch and all the excitement quickly defused thanks to General Ramey’s quick thinking from Carswell AFB in Ft. Worth, Texas, but one might ask why there was a crucial rise of the security state at that very year? Was it just a coincidence that suddenly numerous intelligence services were created along with international surveillance regulations? Was it a pure coincidence that Project Grudge was organized to begin the Air Force investigation of the many UFO sightings taking place across the US?

With rumors that the Germans had gotten much of their advanced weaponry from a treaty with an Alien civilization and yet the Allies seemed to have been left out of the equation was this not a worrisome concern of the US military? Why were the Russians keen on infiltrating the US classified operations in New Mexico if there had not been strong evidence that the Roswell debris field had been more than a weather balloon? In just 3 years more US nuclear tests had developed the H-Bomb but thanks to Russian spying they would also quickly create their own Hydrogen bomb. A shocking number of aerial, surface, and underground nuclear atomic detonations began! In New Mexico, Nevada, and even Bikini Atoll in the Pacific the American nuclear community continued their atomic tests with a shocking frequency that exposed many US servicemen to dangerous doses of radiation that would come back to haunt families with resulting cancers, child retardation, sterility, and more related illnesses, but still the tests went on. Why? It would seem that there was an urgent underlying reason. Could it be that the nuclear testing was being used to demonstrate that to some secret aggressor that 1) Mankind possessed weapons of mass destruction 2) Was willing to use them 3) And in an the event of a war the earth would be rendered useless by virtue of radioactive contamination?

What corroborating actions were taken that might demonstrate a dangerous presence unknown to the general public but well known to a military that knew they were outmatched? In 1946 Admiral Byrd commanded a task force that left the US for the Antarctic as evidence indicated there could still be Nazi installations secretly operating there, perhaps an underground base. Project High Jump resulted in casualties and losses reminiscent of battle not of a supposed scientific expedition. After cutting short the planned operational time and returning Richard Byrd testified in front of Congress demanding nuclear weapons warning of strange crafts that could travel at high speeds from the South Pole to attack the US. 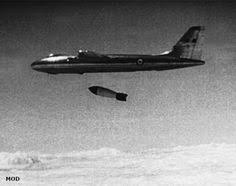 That same year, according to Donald Keyhoe, a US Air Force Lieutenant theorized that an extraterrestrial base could be located somewhere in the solar system, for instance, on one of Saturn’s moons. From there they could observe the earth and remain far enough away to avoid detection. Although the USAF refused to officially acknowledge the paper it was given to the media to read. Why would a USAF officer be speculating about the existence of an alien base in our cosmic neighborhood in 1946?

Already by 1948 the US and Soviet military pilots were coming into direct conflict with UFO’s violating their nation’s air space. By 1948 at least one US pilot had been killed but in 1945 there was the infamous Flight 19 disappearance of 5 US Navy bombers in the Bermuda Triangle where rumors of an abduction by extraterrestrials ran rampant. In 1948 Naval Missile Commander R. B. McLaughlin observed intelligently controlled high flying and high speed unidentified objects flying over White Sands missile range in New Mexico. When he admitted this to Life Magazine according to Captain Edward Ruppelt of Project Blue Book, McLaughlin was transferred to duty on patrol in the Arctic Ocean.

In 1952 a huge nationwide “UFO Flap” occurred-a concentration of sightings over a short period of time. It was that year that repeated violations of White House air space were observed by pilots, radar operators, and air traffic controllers. US F-94 C interceptors repeatedly chased UFO’s that out ran them or simply disappeared off the radar screens as soon as USAF jets entered the area. President Truman demanded answers! General John A. Samford was forced to hold the largest press conference since World War II in order to address the growing hysteria over the inability of the US Air Force to defend US air space over the nation’s capital. Instead, he reassured the media that there was no evidence of threat to the United States though there were a percentage of unexplained sightings.

Throughout the mid 1950’s according to Director of Project Blue Book, Captain Ed Ruppelt, sightings continued with few explanations. Frank Feschino, Author of the Book, “Shoot Them Down” makes well founded reconstructions of large UFO formations and attempted intercepts by SAC pilots that resulted in missing US aircraft and pilots never to be seen again. Former US Marine Corps aviator Donald Keyhoe was convinced that the unidentified objects being pursued by US military pilots were of interplanetary origin. His Pentagon contacts were constantly supplying him with the forbidden knowledge that the authorities didn’t want the public to be aware of. 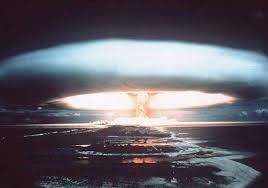 On November 23, 1953 Air Force radar picks up a “bogey” near Soo Locks over Lake Superior. Lieutenant Felix Moncla and backseat radar officer, Lt. Wilson are scrambled from Kinross AFB thanks to an alert issued form Truax Air Force Base ADC (Air Defense Command) who are tracking an unidentified radar blip on their screens. The F-89 Scorpion all-weather interceptor they are flying is now at 500 knots as they approach their target. At 30,000 feet and 160 miles north of Soo Locks the aircrew is instructed to descend to 7,000 feet. The rear seated radar officer, Robert Wilson is having trouble with his set and they are having to rely upon ground guidance as they make a steep descent to identify their aerial adversary, but something goes very wrong! Air Force radar operators watch as the two blips merge, contact with Lt. Felix Moncla and Robert Wilson are lost, and the F-89 Scorpion disappears forever. Subsequent rescue efforts with hours yield no further clues.

1954, Griffiss Air Force Base in New York state is the scene of a deadly UFO encounter as a two man flight crew are vectored to an unidentified aerial object that hovered over the Walesville area. As the fighter pilot climbed higher into the crisp blue sky of the upper altitudes, the rear seat weapons officer tracked the object within 6 miles of their course and heading from his onboard radar unit. He readied a lock-on for an air to air missile should they intercept an enemy. Within a mile of the airborne anomaly something goes horribly wrong as the crew run into a wall of heat, the cockpit is filled with a suffocating wave of heat. Both pilots struggle with their controls trying to maintain flight but are forced to eject from their aircraft. Suddenly they look down in horror to find that their disabled aircraft is plunging downward toward the city below.

The fighter jet crashes into a house killing a family of four. The airmen can only look on helplessly as they descend earthward in their parachutes. One of the aviators is so stricken with guilt he wants to contact the civilians of the town to explain what happened, but he is quickly retrieved in an Air Force staff car shortly after the crash and driven back to Griffiss Air Base before he can explain anything to anyone. A number of mundane explanations have been given for this mishap, but none make any sense. In the realm of the UFO logic begins to vaporize as the shadow of the unknown descends upon the unwitting and the unsuspecting.

With the unsettling evidence of losses of personnel and aircraft would it not be plausible that some completely unorthodox method of demonstrating destructive capability would have been considered? According to Donald Keyhoe as a result of a number of purported UFO crashes a retaliation by whoever was behind the UFO mystery may very well have been responsible for a string of inexplicable aircraft fatalities all over the world. Some 600 worldwide crashed occurred within a short period of time in which pilot error or mechanical failure had not been responsible!

Actions taken against who?

In 1960 two major steps were taken by the US Armed forces. Project Saint, the first orbital defense system was launched, Designed to identify unknown objects in orbit and destroy them this program predated the “Star Wars Initiative” unveiled during the Reagan Administration. That same year Project Horizon by the US Army was proposed according to Philip J. Corso, a former intelligence officer and science advisor. Corso claimed that the Department of Defense was concerned about possible UFO activity on the moon and the US Army was proposing a manned lunar base on the moon to monitor the situation.

It would seem that all of these incidents point to a desperate attempt by the US military to deter the intrusion of UFO’s into US air space with many tragic results. This would demonstrate the technical disadvantage that President Eisenhower is said to have dealt with when negotiating a secret treaty with the extraterrestrial presence. It would indeed seem that a large number of confrontations were occurring for more than a decade with human aviators being on the receiving end of crashes and disappearances. Could nuclear testing have been a ominous way of demonstrating the kind of intent that would signal a “Scorched Earth” retaliation for hostile alien actions?

According to Philip J. Corso, the US Army was not able to gain parody with the UFO threat for quite some time until the development of the HAARP Project and a missile that would launch and use a literal death ray that could knock down several incoming threats at a time once it was airborne, but until then it would seem that if the UFO threat had rendered human defenses into a disadvantage that the only trump card left would have been a nuclear deterrent that would either wipe out the intruders or ensure that nothing would be left for them once the earth had been repeatedly bombarded by atomic weapons. There is a long history of UFO sightings over SAC missile installations all over America and the tampering of launch codes while the “Birds” were still in their silos. Could this be the true hidden legacy as a last resort scenario that saved mankind from being outclassed and rendered defenseless by an alien threat?

James Roberts replied to Guardian of Scotland's discussion This was passed unanimously during the attempt to impeach President Trump
"Well that's good, if mostly, or totally symbolic. One issue the Progressives are way off as to…"
6 hours ago