Head of British Psychological Warfare Executive (Propaganda), Victor Cavendish-Bentick in a handwritten note, wrote on Aug 27th, 1943, “We have had a good run for our money with this gas chamber story we have been putting about, but don’t we run the risk eventually we are going to be found out and when we are found out the collapse of that lie is going to bring the whole of our psychological warfare down with it? So isn’t it rather time now to let it drift off by itself and concentrate on other lines that we are running.” Public Record Office Document F0371/34551 revealed by Stephen Mitford Goodson, ‘Inside the South African Reserve Bank’.

Michael Walsh, the author of the bestselling book, The All Lies Invasion, says “the investigative financial journalist, a friend of mine, died suddenly in 2018 in strange circumstances.”

The BBC in 1942 was putting out rumours of gas chambers. However, in 1943 the head of British Intelligence wrote a memo stating that “there was absolutely no evidence of anyone being gassed in gas chambers, or of Polish children being shot when their parents went to labour camps.”

This memo was signed by B Cavendish-Bentinck, head of the British Psychological Warfare Executive. Statement by Head of British Intelligence about gas-chamber stories: Public Record Office Document FO 371/34551.

This Foreign Office document was declassified ages ago, after the 30 years period, and yet David Irving seems about the only British Historian who has wanted to comment upon it.

The document dated 27th August, 1943 continues: “In my opinion, it is incorrect to describe Polish information regarding German atrocities as trustworthy. The Poles, and to a far greater extent, the Jews, tend to exaggerate German atrocities in order to stoke us up. They seem to have succeeded.

As regards putting Poles to death in gas chambers, I do not believe that there is any evidence that this has been done.

There have been many stories to this effect and we have played them up, in P.W.E. (Pay Warfare Executive) rumours without our believing that they had any foundation. At any rate there is far less evidence than exists for the mass murder of Polish Officers by the Russians at Katyn.

“I think that we weaken our case against the Germans by publicly publishing atrocity stories for which we have no evidence. These mass executions in gas chambers remind me of the story of the employment of human corpses during the last war for the manufacture of fat, which was a grotesque lie……” Signed V Cavendish-Bentinck.

As a result of this statement, a telegram was sent from the Foreign Office to Washington the same day, and copied to Moscow, requesting that no allusion be made to ‘gas chambers’ re German atrocities in Poland. The statement was sent by the Head of the British Psychological Warfare Executive, Victor Cavendish-Bentinck:

“On further reflection, we are not convinced that evidence regarding the use of gas chambers is substantial enough to justify inclusion in a public declaration….  ” : NOTE: A copy of this message is kept in the Public Record Office, in the File PRO FO 371/34551 dated 24th August, 1943.

Maser puts Allied atrocity propaganda into the context of the discovery of Soviet atrocities by the German Army. Right from the start of Germany’s eastern campaign, the Wehrmacht made gruesome discoveries in almost every major city that they captured. In their hasty retreat, the Soviets had butchered countless dissidents… When the German s arrived, they found the prisons littered with rotting corpses. Germany seized upon that opportunity and used these discoveries to appeal to the youth of Europe to help fight the communist menace. This call for help was quite successful, in particular after the Germans discovered the mass graves at Katyn… Over the years, Germany managed to raise over one million foreign volunteers to assist in Germany’s struggle against the Soviet Union, the biggest volunteer army in the history of mankind to ever fight for a foreign nation.
To counter the success of German propaganda, the Allies did two things. First, they tried to cover up these Soviet mass murders (Herschaft/Gera, 2012), and second, they themselves went to great lengths to invent similar stories of mass murder or back them and blame them on the Germans.

It was in order to cover up Stalin’s mass murder in Katyn and elsewhere that the British and Americans upheld the rumours about homicidal gas chambers… BUT these rumours originated in messages sent to London by the Auschwitz underground movement. Maser says: “The gross exaggerations of enemy propaganda […] were based upon coded reports from the communist Auschwitz prisoners. “[…] That the propaganda stories which strive to create a sensation were exaggerated was admitted in August 1943 by Victor Cavendish-Bentinck [..] when he explained that the accounts about gassings which originated from Polish and Jewish sources were invented in the same way as propaganda about the German enemy forces of WW1…”

MICHAEL WALSH is an internationally acclaimed journalist, author, and broadcaster shunned by liberal-left corporate media. He is the author of RISE OF THE SUN WEEL, EUROPE ARISE, TROTSKY’S WHITE NEGROES, MEGACAUST, SCULPTURES OF THE THIRD REICH VOLUME I and VOLUME II  and 51 other book titles.

Beware of the Kosher false news.

By jailing people for questioning history, they inadvertently confirm the validity of claims. In the same token people who question "collapse" of building 7 and towers should be jailed as well.

Everything we thought we knew, we don't. It's a war on to grab History, which actually isn't.

“If you tell a lie big enough and keep repeating it, people will eventually come to believe it. The lie can be maintained only for such time as the State can shield the people from the political, economic and/or military consequences of the lie. It thus becomes vitally important for the State to use all of its powers to repress dissent, for the truth is the mortal enemy of the lie, and thus by extension, the truth is the greatest enemy of the State.” ~  Joseph Goebbels

"We'll know our disinformation program is complete when everything the American public believes is false.”
— William Casey, CIA director, February 1981

The above quotes were somewhat presumptuous because neither the Nazi's, the CIA, or Israeli Zionists made comments regarding what would happen if their revisionist history failed, and the Truth revealed.  However, H.W. Bush did:

"If the people knew what we had done, they would chase us down the street and lynch us." George H.W. Bush to journalist Sarah McClendon; Dec 13, 2016.

Just the vision of this possible future lynching event brings a smile to my face. 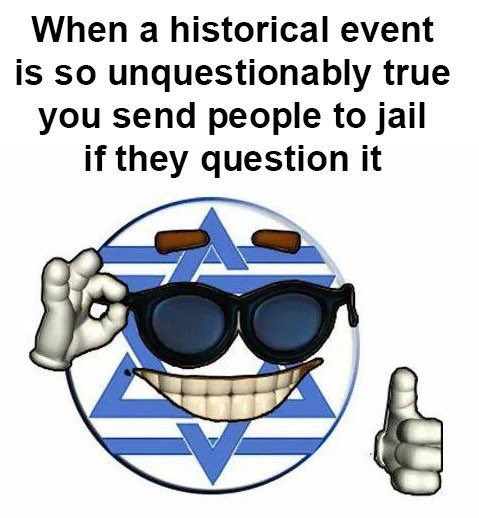 Doc Vega commented on Doc Vega's blog post Donald Trump’s Dangerous Agenda? What Dangerous Agenda?
"FREEDOMROX in all Trump's embattled time in office all I saw was the positive good he was…"
9 hours ago

"Looks more like a Russian propaganda news release than an objective news item. Whatever,…"
9 hours ago

Less Prone left a comment for Gina Paulin
"Welcome to a revolutionary concept in public communication, the truth. Here the opinion is free."
10 hours ago

Less Prone left a comment for Stew
"Welcome to a revolutionary concept in public communication, the truth. Here the opinion is free."
10 hours ago

Less Prone left a comment for Tim Brown
"Welcome aboard Tim. I hope you find what you are looking for."
10 hours ago

"LP:  Fauci's entire testimony is full of "I don't remembers" and total…"
14 hours ago

"When Adam knew Eve, she became pregnant. However that does not happen between men or between women.…"
15 hours ago

Parrhesia commented on FREEDOMROX's blog post Common Sense look at Elon gated Musk rat
"People are trained to seek a "savior" whether by superheroes, guys in white hats or…"
16 hours ago

"It's a reflection of the societies - everything "woke" self-destructs. "
17 hours ago