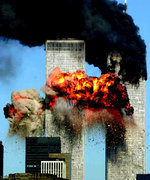 The Curious Case of Philip Marshall

Incontrovertible - A 9/11 Documentary by Tony Rooke

FEMA Investigator’s Shock 9/11 Claim: ‘Vault Contents Emptied Before Attack… They Knew It Was Going To Happen’

You need to be a member of DEMAND 9/11 TRUTH NOW ! to add comments!

Comment by Jeff on September 3, 2009 at 3:50pm
James, the truth behind 9/11, which I believe will never be known, is the key to everything that is occurring today globally from economics to social disruptions caused by war. Anything and everything connected to global events today in all social/political contexts has it's roots in the events of 9/11.

I don't recall who it was, perhaps a past president, who said something to the effect of, "nothing happens by accident."

Hey Chris, unless I'm mistaken, your position gives tremendous credibility to the concept that no anglo-saxon white men and no residents or citizens of the United States had anything what-so-ever to do with 9/11 and if that's your position we disagree.

Even though I don't believe we'll ever know the truth, and if ever certainly not in any of our lifetimes, it's still paramount to keep this subject in the forefront of civil dissent since this single event shaped the world we know today and the world we see racing towards us at an unprecedented speed.

Comment by Localtarian on September 3, 2009 at 3:14pm
good idea James, thanks for the invite.

Comment by Rita Wells on September 3, 2009 at 2:27pm
Thanks for the invite,ABSOLUTLY RIGHT Vincent and Paul.

On September 11, 2001, the willful negligence of federal, state, and local politicians aided in the murder of 3000 people. These murders were the foreseeable, inevitable result of decisions made by Presidents and Congresses beginning in the 1960s. They dismantled procedures that screened out dangerous aliens attempting to get visas while masquerading as students, tourists, and business travelers; and concurrently, to open US borders to millions of illegal aliens.

ALL nineteen of the 9/11 terrorists were given entry visas by the State Department despite laws that barred all of them.

In disregarding the law, bureaucrats merely obeyed the wishes of politicians who in turn bowed to lobbying and campaign contributions by the travel and education industries. They wanted ever increasing numbers of aliens to fill more airplane seats, amusement parks, hotels, and college and university classrooms.


There were profits to make and political careers to build by making it easy for any alien to get a visa, and neither the profiteers nor the politicians cared if some visitors were terrorists and criminals.
Meanwhile, employers such as beef and poultry processors, contractors, etc., discovered that the worker protections of the New Deal could be evaded and profits increased if American labor was replaced by cheap foreign workers, both legal and illegal.

Presidents and Congresses responded to their campaign donations by stripping America’s borders of personnel needed to keep out illegals and ending prosecutions of employers of illegals. State and city politicians joined in by giving drivers licenses, subsidized housing, and free medical care to illegals, and refusing to report them to the INS.

By 2001, the result of these political decisions was a population of over 10 million illegals and a culture of absolute lawlessness.

Thus, Al Qaeda’s planners knew the U.S. would grant visas to their agents, and that once in the U.S. the terrorists could blend in with the millions of illegals, free from fear of discovery; free to get drivers licenses, open bank accounts; free to finance, plan, and rehearse their mass murder; free, with U.S.-issued drivers’ licenses as valid ID, to board planes they would use to murder our loved ones.

All this freedom was granted them, wrongfully but knowingly, by American politicians in order to get support from those who profit from open borders. This must stop.

- Peter Gadiel, J.D., father of James Gadiel who was lost in the World Trade Center Disaster.
Peter is now a Board Member of 9/11 Families for a Secure America www.911fsa.org

Comment by The-Database on September 3, 2009 at 1:03pm
we are holding a protes in Brussels on 11-09-2009 whit United for Thrut and some we are change from Europe http://www.unitedfortruth.org/