[4/14/17]  MAC SLAVO– There’s a whole sordid history to America’s idiotic return to war again – and again – even though each and every episode, each and every war has wound up being a pile of lies.

But there’s no time to go into that here, and it’s besides the point. If the truth were simply sitting there, on a platter, it would still remain unknown.

So disorienting is the multi-pronged, two-sided propaganda regime that controls our thinking, and thus our lives, that Americans seem incapable of learning from their past mistakes – making them regressive and defenseless animals that are being easily manipulated and contained by the larger collective organism that has pushed for war as a means of metabolism and growth.

Nothing good can come out of what happened in Syria. Its consequences may take time to play out, or not.

And no one is currently in a position to stop or even stand up to any of it.

They love it when we bomb and slaughter innocent people in other countries, I want to here what they say when it starts raining bombs here, the American people really do love their sports and Hollywierd movies though.

Apparently 'WE' "love it" too since many are still paying them extortion (tax) to continue in 'their' endeavors. 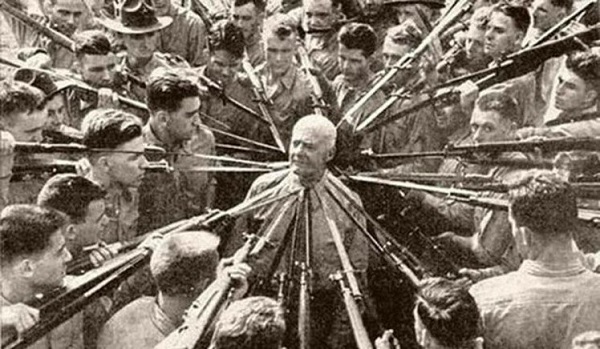 IF COUNTRY IS RUN BY SO-CALLED MILITARY INDUSTRIAL COMPLEX THEN DOES NOT A MILITARY TAKE OVER MAKE SENSE!!!

Yup. And the brain dead just keep on voting, and believing (in faith, like religion) government, and following, and doing as told, and ..., ahya all that. But just keep eating 'their' food, taking 'their' vaccines, medicine, currency, legal advice, deleting the minds of our children in 'their' fucking schools, giving them our sweat so 'they' can promote more WAR (and then complain about WAR - fucking stupid!) and this is the type of article that can be written..., over and over and over again.

But wait! It gets better - all along the line we just keep on calling our fellow man names like, 'sheeple', a term 'THEY' gave you and me, and now we use it on each other! Ain't that some sweet shit.

First of all 'We' are not bombing anyone - elected officials are, and some non elected ones also! But Who voted for that - who, that is informed, actually wants that?

Richard is correct - this collectivist 'We' crap is constantly used as justification...

AE, how are we meant to describe those who apparently (like their masters) don't possess any empathy or other basic tenets of humanity and regard everything going on as perfectly normal and acceptable?

There is only so much you can do - for more than half of my adult life I have tried to speak out and warn against what has now come to pass - in these current times, the morons actually resist the truth even more.

I am (about) done - mentally, physically, spiritually with trying to wake up others that evidently have no wish to - I guess that as Aldous Huxley expressed in a letter to Eric Blair (George Orwell) that:

Within the next generation I believe that the world’s rulers will discover that infant conditioning and narco-hypnosis are more efficient, as instruments of government, than clubs and prisons, and that the lust for power can be just as completely satisfied by suggesting people into loving their servitude as by flogging and kicking them into obedience.

This is nothing new...

Already long ago, from when we sold our vote to no man, the People have abdicated our duties; for the People who once upon a time handed out military command, high civil office, legions — everything, now restrains itself and anxiously hopes for just two things: bread and circuses

If there is to be change, once again, it will be down to a minority to resist...

I only hope this is the case.

Agreed, DTOM. I too, have reached a point that of know return regarding patience with my fellow man. I am becoming intolerant to willful ignorance and the people that practice it's use. We are indeed a failing empire with a population addicted to "bread and circus".

Three Strikes and Your Out - JFK Killed by Jews

Central Scrutinizer favorited MAC's discussion Here’s a List of Republicans Who Have Turned Their Backs on Trump, Calling for Him to Concede
1 hour ago

Central Scrutinizer replied to MAC's discussion Here’s a List of Republicans Who Have Turned Their Backs on Trump, Calling for Him to Concede
"Riggleman's been a piece of useless shit since the libtard Take-Over of Va of 2018"
1 hour ago

"Vancouver, Toronto and Montreal three of Canada’s biggest cities and all with growing…"
2 hours ago

Daily Con commented on Daily Con's blog post COVID 21? Canadian Liberal Party Committee Member’s warning letter: Real or Hoax?!
"Thanks for all your replies folks. We all know whatever happens this will be a deliberately…"
2 hours ago

Here’s a List of Republicans Who Have Turned Their Backs on Trump, Calling for Him to Concede

VOTE THEM OUT!Here’s a List of Republicans Who Have Turned Their Backs on Trump, Calling for Him to…See More
3 hours ago
1 Comment 1 Favorite