‘They Shot Him in the Head’: South African Security Expert Details Horrific New Wave of Attacks on White Farmers

Illegal land seizures and attacks have continued to ramp up across rural South Africa, in a violent, escalating situation reminiscent of Robert Mugabe’s years of brutal land reform in the neighboring country of Zimbabwe.

The ruling political party in South Africa is seeking to amend the nation’s constitution in order to allow the free seizure of land from white farmers. Earlier this month, President Cyril Ramaphosa declared that the time had come for a mass expropriation of land without compensation — a clear and aggressive action against the white farming community.

Despite the government stopping short of sending in officials to carry out this illegal work, members of the civilian population have pre-empted the action and taken matters into their own hands — and the results have been horrific.

In a phone interview with Faithwire, Afriforum’s Head of Community Safety, Ian Cameron, said that incidents of land invasion, abduction and even murder have become increasingly frequent over past weeks.

“The last week it has really exploded,” he explained. “We’ve had five farm attacks. One was a murder. [Saturday] night, two attackers approached a small holding outside of Pretoria, neutralized the electric fence, lifted gate off its tracks and entered the property.”

Cameron said that when the attackers breached the perimeter of the farm, the owner went outside and confronted them in a bid to protect his land and family.

“We had a team on scene where the body was,” Cameron continued. “It seems the farmer [himself] went outside to confront the attackers. They shot him in the head, killing him instantly.”

The criminals marched forward into the house, where they “shot his sister in her abdomen,” Cameron said, adding that the farmer’s wife “is now very traumatized.” The attackers “fled on foot,” he noted.

A quick scan of Cameron’s Twitter account shows numerous updates detailing a series of brutal farm attacks. One disturbing image shows an elderly lady who had been brutally beaten by land invaders. Severe bruising can be clearly seen across her face. Cameron explained that the woman’s injuries were the result of her being thrown out of a moving car and claimed that she even suffered torture. 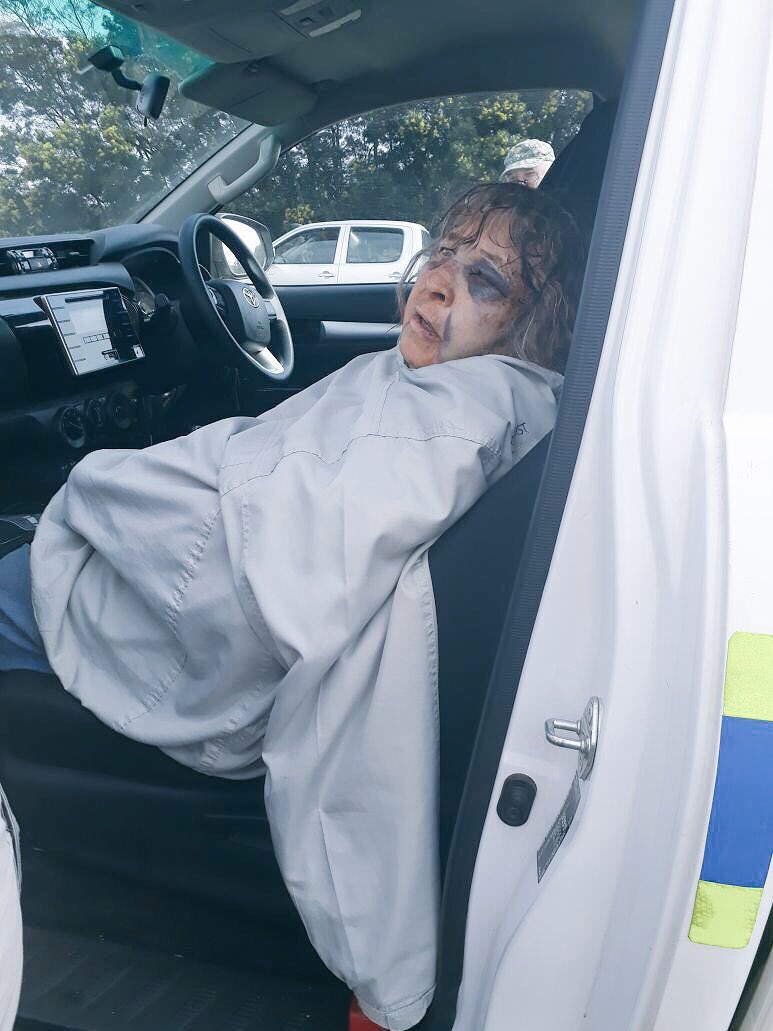 Ian Cameron
@IanCameron23
This elderly lady was whipped by her attackers during a farm attack about 24hrs ago between Lydenburg and Roossenekal. One attacker was shot dead later by @SAPoliceService . Massive community effort to assist finding this victim after she was dumped next to the road.

2:02 AM - Aug 26, 2018
327
628 people are talking about this
Twitter Ads info and privacy
Cameron told Faithwire that the thugs stormed through farmland before “holding up a group of ladies up for an entire afternoon.” They “took them to the town, abducting them” before “throwing the lady out the car and whipping her over the head,” he said.

In this instance, Cameron explained, the police took swift action, pursuing the attackers, and even shooting one dead. However, police forces in other areas are under-resourced and struggling to deal with the mounting violence. In addition to this, in a country fraught with racial tensions, widespread corruption has thrived within the ranks of law enforcement.

“There are areas where police are absolutely atrocious,” he noted.

Cameron said that although the situation has become notably more severe and dangerous, land seizure has been going on for years.

“Since 2012, we have had a slow increase in land being annexed,” he explained. “People would just show up and steal the land.”

“Now it is increasing,” he said. “It has exploded completely, to a point where in the last few weeks, land is literally being grabbed. The attacks are increasing.”

When asked about what lies ahead, Cameron’s outlook was realistically bleak.

“Civil unrest is highest it has been in six or seven years,” he said. “There will be a drastic increase in public violence, and we expect it is going to get even worse by the election next year.”

“The cruelty of attacks will increase,” he gravely noted, adding that his team is “quite often seeing torture” as part of the assaults. The attackers, he explained, are known to “pour boiling water over people, or burn them with clothing irons.”

With the political situation in such dire straits, and with attacks taking place on a daily basis, Cameron’s job is to help keep these rural communities safe. As Head of Community Safety at Afriforum, an organization that represents the Afrikaaner farming community, he consults on a variety of security issues facing agricultural landowners.

“We train different communities on what to do within the legal framework,” Cameron noted, adding that the organization “shows them how to patrol” and “gives them radio communication training.”

“It helps them safeguard them,” he added.

Just a few days ago, in a question and answer session on his controversial policy, President Cyril Ramophosa said that he believes South Africa can now embark on a “very positive and rapid process” of land expropriation, redistributing both public and private land to other South African citizens. “This is no land grab,” Ramaphosa wrote in a column at Business Day, “nor is it an assault on the private ownership of property.”

But the blanket reform policy, combined with the explosive rhetoric of extreme left-wing politicians such as Julius Malema, has spurred on civilians to attack and steal privately owned farms.

Malema has become well known for leading his supporters in the racist chant “Shoot the Boer” and was recently caught on camera firing an automatic rifle into the air following a rally with supporters of his political party, Economic Freedom Fighters. There is no question that he is an erratic and dangerous man, who would willingly incite deadly violence against the farming community.

“Through land expropriation, we are forcing white people to share the land which was gained through a crime against the humanity of black and African people,” Malema said in a press conference on Thursday. “South Africa is a post-colonial country ceased with deep racial inequalities that were long designed by apartheid and colonization. Our land expropriation program seeks to realize the ideal of equality and human dignity.”

“One thing that is important to note is that our government says they won’t allow the land to be seized, but I can tell you it is already happening,” Cameron said. “Government officials haven’t started taking the land yet, but people are anticipating what they are going to do.”

But, but this is the better kind of violence, done by the nonrasist people. Serves them Nazis right, doesn't it? Really. Let them get the Boers out and starve, the Zimbabwe way. "History is full of irony and misdirection!"
56 minutes ago

"that is the official story, although the first 3 should read CIA"
6 hours ago

"Except we won't get an olympic-sized swimming pool, a theatre with a stage and costumes to put…"
7 hours ago

"Masks do work. All depends who's agenda is being fulfilled. They suffocate the wearer which is…"
8 hours ago

steve commented on Aaron's blog post NEW HEAD OF NEWS AT NBC-UNIVERSAL OPENLY PROMISES TO DISCRIMINATE AGAINST CAUCASIANS
"Buuuuuuuuuuut that's okey dokey cause of RAAAAAAAAAAAACISM AND SLAAAAAAAVERY. Steve"
10 hours ago

"Most of these folks look like GUESTs in MY COUNTRY and should start behaving as such, except for a…"
10 hours ago