Story that shows why children aren’t really being protected. Love the investigating side of journalism and trying to connect the dots. Here is a story and connections that is showing organizations that should protect children, but may be protecting predators instead.

Below is how the story to the world was presented:

More than 1,000 child sex predators arrested during Office of…

Mayak, a Russian satellite that will become one of the brightest stars in the night sky (Something about this gives me the creeps)

mayak (ABOVE: An artist’s rendition of the Russian Mayak satellite.) Emigrate While You Still Can! Learn More... Mayak, a Russian satellite that will become one of the brightest stars in the night sky, is just two weeks away from launching into space. Their goal is to make the unique satellite bright with the use of a giant reflective sheet of material, but some scientists are warning that there may be negative consequences. The satellite is small, roughly the size of a loaf of bread and in…

WATCH: A Dozen Cops Yank Man from Truck, Attack Him Like a Pack of Dogs

Clark County, IN — A dramatic high-speed chase involving the Indiana State Police was captured on video Thursday as it came to a violent end in an Indiana corn field. Unlike many high-speed chases in the past caught on video, the camera in the chopper above did not…

New Jersey — A scathing investigative report from NJ.com has revealed…

Friday, June 30Galatians 5:11 It is for freedom that Christ has set us free. Stand firm, then, and do not let yourselves be burdened again by a yoke of slavery.
Read Galatians 5

The White House deliberations come as U.S. embassies and consulates await instructions later Wednesday on how to implement this week's Supreme Court order that partially reinstated the ban after it was blocked by lower courts. The new measures are expected to be implemented Thursday.…
Continue

According to an extensive…

A former lottery computer programmer has pleaded guilty in Iowa to running a criminal scheme that allowed him to collect millions of dollars in lottery winnings in four other states.

The vice chairman of President Trump’s commission on election integrity sent a letter to all 50 states Wednesday requesting information on their voter rolls.

Kansas Secretary of State Kris Kobach is seeking several pieces of information about voters, including their names, birthdays, the last four digits of their Social Security numbers and their voting history dating… 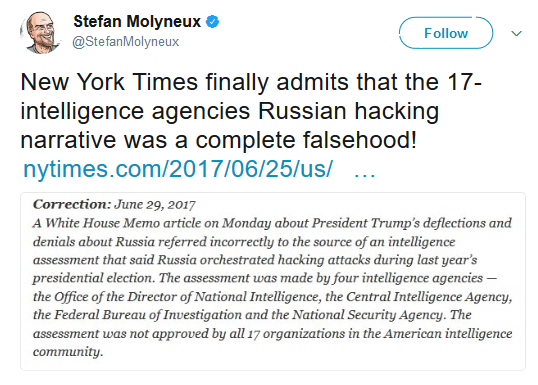 I know millions of people ... just want to know what happened in this investigation'

Any American who cares about the rule of law should be demanding the truth about the mysterious murder of DNC staffer Seth Rich, says Tim Canova, a Democratic law professor who is challenging former DNC chair Rep. Debbie Wasserman Schultz for her congressional seat in 2018.…

The Crown Prince of the UAE Mohamed bin Zayed Al-Nahyan asked the Americans to bomb the headquarters of Al Jazeera during the US war on Afghanistan, Arabi21.com revealed yesterday.

According to the document bin Zayed spoke about a meeting between his father and the former Qatari Emir Sheikh Hamad bin Khalifa Al-Thani.

Why did Bob Mueller shut down the FBI Bin Laden investigation just before 9/11?

Why did Bob Mueller shut down the FBI Bin Laden investigation just before 9/11? https://t.co/KyHytKkj4P

The ship is going down

For the LORD loves the just and will not forsake his faithful ones. They will be protected forever...

Under The Obama Admin... Rosa Parks House Was Sent To Germany

Saved From Demolition, Rosa Parks’s House Gets a Second Life…

Chris of the family Masters commented on Doc Vega's blog post Inside My Head
"I feel for you Doc...."
3 hours ago