Yes, there is a Secret Santa, Anonymous helpers spread cheer, $100 bills through Detroit and Downriver

Sometimes he uses the back aisle of a thrift shop, or even the steps of a Detroit bus to spread Christmas cheer.

Santa -- or more appropriate, Secret Santa -- visited Detroit and Downriver on Thursday, handing out more than $13,000 in $100 bills to those who looked like they needed a little help.

All Santa asks in return: a random act of kindness for someone… Continue

I have decided to take a hiatus from truth based websites for a while. I am really frustrated with a lot of things, and I need a break. I will be around for maintaining my websites, but that's about it. I hope everyone has a happy holiday.
-Zeke

Capitol Hill (CNSNews.com) – While Congress has voted to raise the national debt ceiling to $12.4 trillion, the Government Accountability Office (GAO) has reported that the federal government’s unfunded liabilities – the costs of promised benefits through Social Security, Medicare, Medicaid, and several other programs – total $62.9 trillion in today’s dollars.

A third draft climate agreement being considered by world leaders at the U.N. summit in Copenhagen

COPENHAGEN — A third draft climate agreement being considered by world leaders at the U.N. summit in Copenhagen has introduced greenhouse gas emissions targets for both industrialized and developing countries. The document, titled the Copenhagen Accord, says rich countries should reduce their greenhouse emissions by at least 80 percent by the year 2050.…
Continue

Calling Dr. Pangloss, We never had it so good – right?

I thought it might – just might – be a parody, a spoof, a weak attempt at irony. But no, it turns out that Nick Gillespie, the former editor of Reason magazine, and now chief honcho over at something called "ReasonTV," is absolutely and incredibly serious about his contention that We Never Had It So Good. And why, pray tell, are we supposedly so blessed? Well, it seems that nerdy geeky-looking white kids now have some really really cool computer games to play,… Continue

Neither the form of Socialism in South America or the form of Democracy here in North America are pure forms of either method of governing people. Our Democratic Republic steeped in Capitalism is nothing more than Fascism disguised as freedom to provide the illusion of free will when in reality we're all slaves to the system.

Evo Morales and Hugo Chavez are reinventing the wheel, providing more freedom for their respective people and becoming a threat to Washington at the same time.… Continue

As I have previously pointed out:

Continuing the wars in Afghanistan and Iraq will more than wipe out any reduction in carbon from the government's proposed climate measures ...

The continuance of the Afghanistan and Iraq wars completely and thoroughly undermines the government's claims that there is a global warming emergency and that reducing carbon output through cap and trade is needed to save the planet.

I can't take anything… Continue

(NaturalNews) All of a sudden, H1N1 vaccines are available all across America. Walgreens and other pharmacies are pushing the vaccines as if there were an "everything must go" liquidation sale under way. Hurry, get your swine flu vaccine today before everybody figures out they're useless!

The marketability of vaccines has a strict time limit. They're only in demand during the fear phase of a pandemic, and that fear phase has long since faded for H1N1. Virtually everyone who wants an… Continue 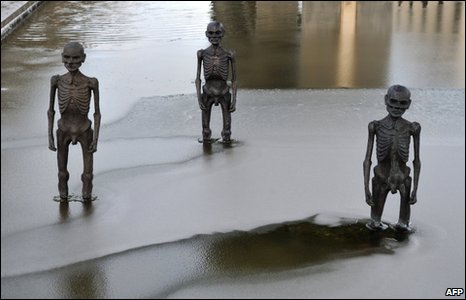 Sculptures of emaciated humans stand outside the talks venue

Leaders are gathering for the final scheduled day of the UN climate summit, amid uncertainty over the shape of any eventual deal.

A draft political agreement drawn up by a small group of countries including the UK, US and Australia was rejected during overnight discussions.

Panic in Detroit: Unemployment Stands at 50%

Panic in Detroit: Unemployment Stands at 50%

Nearly one out of two workers in Detroit are unemployed, according to a report by The Detroit News. It’s a figure far higher… Continue

Ning is taking a short break!

Ning is taking a short break!

Thanks for your patience. We should be back in action shortly.

If you want to check on the system status, visit the Status Blog.

Added by whatawonderfulworldJethroClampet on December 18, 2009 at 1:01am — No Comments

There is no one more qualified than Reg Keys -- whose son Tom was killed in Iraq -- to comment on Tony Blair's admission to the BBC that, if he hadn't used the non-existent weapons of mass destruction to justify a war crime, he would have found another "argument" -- that is, another lie.

This is a must-see interview.

The Statistics Behind Autogenocide

When the totality of our societies ills are viewed together, as they are here, the picture becomes quite clear. A happy America? A content society?

Anything but. When everything below is considered we are living lives of what's termed 'quiet desperation,' almost all of us. We don't even recognize, even those of us that are active here on 12.160Mhz, that we have learned helplessness. We just can't see it. And when it's so obviously pointed out, we refuse to believe… Continue

Astronomers have discovered a new Earth-like planet that is larger than our own and may be more than half covered with water, according to a study published Wednesday in the science journal Nature.

The so-called "super Earth" is about 42 light years away in another solar system and has a radius nearly 2.7 times… Continue

LAHORE: Of the 60 cross-border predator strikes carried out by the Afghanistan-based American drones in Pakistan between January 14, 2006 and April 8, 2009, only 10 were able to hit their actual targets, killing 14 wanted al-Qaeda leaders, besides perishing 687 innocent Pakistani… Continue

The Wit and Wisdom of Sir Francis Galton

"It has now become a serious nescessity to better the breed of the human race. The average citizen is too base for the everyday work of modern civilization." --Sir Francis Galton

One of my major lines of research has been the scientific control and manipulation of human beings, and the Eugenics movement is one of the most perfect examples I've found. The overlap between good intentions and nightmare consequences is highly instructive.… Continue

A wave of strikes culminating on Thursdays pan-worker mobilisation has been the response to the scaremongering of the government amidst the worsening economic crisis that threatens Greece with bankruptcy.

After the week of riots came the week of strikes: the multifold strikes that are taking place since Tuesday 15 December and peaked on Thursday 17 with the pan-workers strike called by PAME, the Communist Party Union Front, as wells a dozens of… Continue

COP 15 Press Conference - Retooling the Planet & Who Will Feed Us?

Launch of two publications by Action Group on Erosion, Technology and Concentration (ETC) and the Swedish Society for Nature Conservation…

Autogenocide - Why We Should All Be Scared

The Nine Stages of American Autogenocide

American Autogenocide is the deliberate, systematic and legal murder of American citizens by socially-engineering the die-off of populations that… Continue

Chris of the family Masters commented on Freedomrox's blog post Cornholio Virus? 200,000 deaths... Doctors, hospitals, and prescriptions kill 786,396 people every year!
"The medical mafia video is spot on. This man is highly qualified to make such statements."
6 minutes ago

"Good one, It's nice to see a child enjoying the day with grandad and sharing interests in…"
10 hours ago

"A Real Phone ! Give it the drop test and it'll damage the floor, but drop the hand set and it…"
11 hours ago