Gas Hole is a frightening investigation into big oil – its origins its growth and the role it plays in U.S. society today. In light of the BP oil spill in the Gulf of… 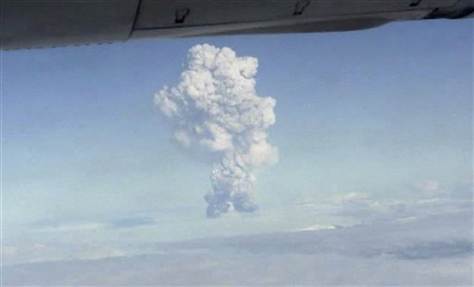 image taken from amateur video, smoke from the Grimsvotn volcano, Iceland is seen from a plane Saturday. Iceland's most active volcano has started erupting, scientists said Saturday, just over a year after another eruption on the North Atlantic…

(NaturalNews) When the Dollarhite family of Nixa, Mo., first started raising and selling bunnies as part of a lesson to teach their teenage son about responsibility and hard work, they had no idea they would eventually meet the heavy hand of the US Department of Agriculture (USDA). According to a recent article covered in Breitbart's Big Government, the USDA recently ordered the Dollarhite family to pay more than $90,000 in fines because they sold more than $500 worth of rabbits in a year --… Continue

Man charged with farting in general direction of a police officer

Man charged with farting in general direction of a police officer


A man arrested for driving under the influence in West…

Earthquakes HAARP and the NWO - a 12160 topic spotlight

In a frightening example of how the state is tightening its grip around the free Internet, it has emerged that You Tube is complying with thousands of requests from governments to censor and remove videos that show protests and other…

China has become a crucial growth market to General Motors, and its sales there are skyrocketing. But the company’s increasing dependence on the still-Communist-ruled state for new sales can create some discomfiting moments.
One of them will come on June 15, when a new “documentary” whose English title translates to The Birth of a Party, will premiere in China…

Apple and Google returned to Capitol Hill this morning to defend themselves against accusations from U.S. politicians who claim that the companies aren't doing enough to protect their customers' location privacy.

"I think anyone who uses a mobile device… Continue

BEIJING — Watermelons have been bursting by the score in eastern China after farmers gave them overdoses of growth chemicals during wet weather, creating what state media called fields of "land mines."

About 20 farmers around Danyang city in Jiangsu province were affected, losing up to 115 acres of melon, China Central Television said in an investigative report.

Prices over the past year prompted many farmers to jump into the watermelon market. All of those… Continue


A coalition of industry associations and Internet companies including Facebook, Google, Twitter, Zynga, Match.com and Skype this afternoon submitted a formal letter of opposition to proposed California legislation that would mandate new…

In a perfect world, the debate about privacy matters should be just what social media claims to be: a conversation. What do we want to see and what do we want to give away to Google, Facebook, Microsoft, and Apple? It’s time to openly talk about it.

Privacy is a hot topic these days, just as it has been for years now.

I began following and taking part in the privacy debate many years ago, when I… Continue

all videos will have to be approved by moderators.

for now on all videos will have to be approved by moderators.

the limit of videos one can add is 4 now as well.

frankly i am sick of the less than provable stuff and this site aims and goals is solution orientated, speculation not welcome imo.