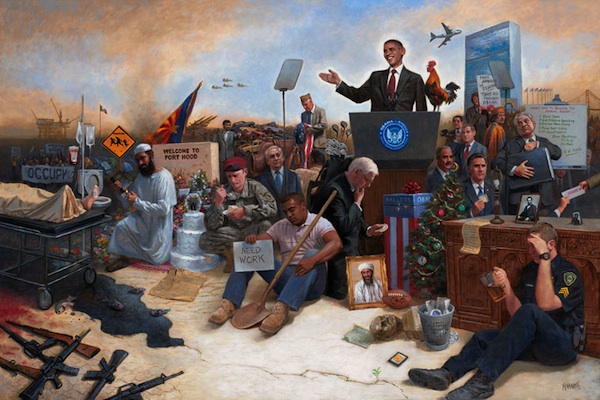 In lieu of an early morning threat that was deemed to be a credible terrorist action officials quickly moved to close down all Los Angeles Independent School District buildings and sent kids back in the buses from which they came. According to one source their were threats of back pack explosives and other possible bomb plants which would lead to police bomb squads combing all school facilities!

What does an incident like this mean? How has an action like this been allowed to strike fear into the innocent public school network were the 2nd largest school district in the US was shut down and narrowly escaped a panic? We can thank the Obama Administration for the foot dragging and denial that has allowed mass shootings and the widespread mistrust that now exists among US citizens. Not only are they afraid of terrorists they knew most assuredly that the government refuses to protect them.

When former AG Eric Holder stopped FBI surveillance of Mosques as ongoing investigations clearly showed that these facilities were being used to distribute radical brochures and even recruit terrorist operatives, a red flag should have been publicized! However, the US media displays little their responsibility to inform the public about possible threats while carrying the torch for political correctness that has cost the lives of many American citizens. 14 dead in San Bernardino would attest to the PR work being achieved through such pro-Islamist organizations as CAIR in order to deflect the issues and intimidate US citizens into feeling like bigots when they are supposed to be reporting suspicious activity that could lead to terrorist inspired killings!

Jeh Johnson, head of the Department of Homeland Security, gave the order to cease examining twitter accounts that make terrorist threats publicly or suggest methods of carrying out acts of murder against the civilian  population. Why? This is a public forum! There is no invasion of privacy, no illegal surveillance of emails. These people have willingly forfeited they right to privacy already! Yet, the ACLU alleges their could be a violation of the rights of terrorists who broadcast their murderous intentions over Twitter or Facebook accounts! Not only is the hypocrisy outrageous, but federal government policy makes a clear choice in sacrificing the lives of the American public over the rights of terrorists!

Why in Garland, Texas when the FBI had prior notification that a terrorist attack would occur at Pam Geller's Allah Cartoon Contest, a private affair, did they refuse to respond leaving 2 Garland officers armed with service revolvers to intercept 2 Islamic terrorists armed with AK-47 rifles? After shooting up a vehicle and wounding a private security guard a police officer fatally shot both terrorists in front of the city's conference center foiling what would have been a slaughter of at least 200 guests who were the targets of these Muslim thugs! Yet, in the aftermath the media and left went after Pamela Geller and the mayor of Garland declared his city Sharia compliant! This is the kind of politically correct insanity gripping our nation.
Corrupt playbook

With each and every act of terrorism President Obama once again begins his gun control rant and virtually apologizes for Islamic terrorism! Is it any wonder why the people support Donald Trump as a GOP nominee in his bid for the presidential primaries as he advocates a temporary ban on refugees and immigrants from Muslim countries? Yet, as Americans die at the hands of radicalized Islamists who comes under attack once again? Not the terrorists, no not them. Donald Trump is attacked by his own Republican Party establishment, by Democrats, and by the left all the while spurred on by numerous Islamic front groups like CAIR!

Is it any wonder that we can expect stepped up terrorist acts, mass hysteria from citizens, the abandonment of commercial flights by tourists, the false re-assurances by the Obama administration that everything should just continue as normal even when entire school districts have to be shut down due to terrorist bomb threats? These are the root causes behind the credible terrorist threat that has been lodged against the LA Independent School District now as even soft targets such as our children are at risk thanks to the blundering of the President and the White House.

Only in America will you find open borders, refusal to identify the threat, and an unwillingness by the government to protect its very own citizens. Thanks to the Obama White House.

Chris of the family Masters commented on Doc Vega's blog post Inside My Head
"Actually, my life has not been exactly a bed of roses, either...."
13 hours ago

Guardian of Scotland commented on Phyllis Maka's blog post BLOW EM RIGHT BACK OUT OF THE HOUSE - good one!
"That is right on. You tell then sheriff. Do not come to Polk County and start any shit. There will…"
20 hours ago