Cognitive Dissonance Why we find it so difficult to discuss politics. 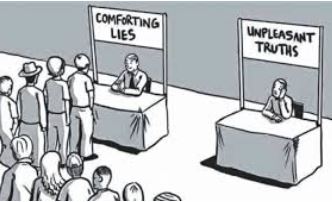 Nearly all of us, both Liberals and Conservatives, suffer from what psychologists call cognitive dissonance. This occurs when a person is confronted with contradictory beliefs, ideas, or values, resulting in psychological stress.

According to this theory, when two actions or ideas are not psychologically consistent with each other, people do all in their power to change them until they become consistent. The discomfort is triggered by the person's belief clashing with new information perceived, wherein they try to find a way to resolve the contradiction to reduce their discomfort.

Note: But, will they make the right decision in relieving the stress between these two opposing ideas; particularly when it involves politics? Most likely not.

Let’s say that a chain smoker just finds out the Surgeon General reveals that smoking is harmful to their health. The obvious solution to remove this conflict is to stop smoking. Instead the smoker reasons that since he gets lots of exercise and eats lots of vegetables he will be OK to keep smoking.

Wrong decision but the conflict in him is resolved.

to Doc V. Your'e a man gifted in words a writer who expresses opinion and thought in a manner that begs the reader to read on. One of those Flexi writers who covers all genre with ease, eloquence and precision. We are Lucky to have Larry and you as there's not many comments here on site.

Well, take that as a complement Larry. Everybody here has a gift and you have a nack to drum up dialog and input into important topics or issues of concern in such a way that others feel compelled in energy to engage and interact. I don't see you as moderator or mediator type character, more of an awesome convener.

Nearly everyone suffers, to some degree with cognitive dissonance.

Is this a compliment or something else?  "Larry, are you the great moderator?"  I prefer to take it as a compliment.

Larry, are you the great moderator? No, we conservatives don't suffer from cognitive dissonance because conservatism is not an ideology it is simply common sense.  Cognitive dissonance comes from classrooms ruled by America hating professors and teachers who called for President Trump's assassination. Can you see the difference in presentation? How many times was Ronald Reagan betrayed by Democrats when they gave their word and tax increases occurred? How many times was President Trump obstructed from trying to get beneficial legislation passed just because he was Donald Trump? Do you remember Nancy Pelosi proclaiming that the US economy would collapse of Trump's tax cut were passed and said Americans would only get crumbs? Well $1500 to $2000 dollars was not crumbs to most Americans although it would be to Feinstein and Pelosi whose husbands both do hundreds of millions of dollars worth of business with the federal government. As a result of the Trump tax cut, employers gave bonuses to their employees and the US economy received resulting stimulus just as in Reagan's tax cut something the Democrats would never allow.

"Literally. A fucking fruitcake."
7 minutes ago