Ron Paul in South Carolina:“The message of liberty is being received by more people every single day.”

Ron Paul: 'This is the beginning of a long, hard slog'

Ron Paul made clear he had no plans to drop out of the presidential race despite placing fourth in the South Carolina Republican primary on Saturday.

In a speech where the Texas congressman touched on most of his libertarian talking points, Paul said that supporter numbers for his campaign…

The chief of the Criminal Division of the U.S. Attorney’s Office in Arizona is refusing to testify before Congress regarding Operation Fast and Furious

The chief of the Criminal Division of the U.S. Attorney’s Office in Arizona is refusing to testify before Congress regarding Operation Fast and Furious, the federal gun-running scandal that sent U.S. weapons to…

Alaska Man Cited For Illegal Bartering: “I Need Some Firewood and I’m Willing to Trade Some Moose Meat”

Chad Gerondale, 41, has hired well-known Fairbanks attorney Bill Satterberg to represent him in the “meat for heat” case, as it has been dubbed by online spectators.

“I’ve got a lot to say about it but (Satterberg) told me not to,” Gerondale told the News-Miner Tuesday morning when he returned phone messages left during the weekend.

Alaska Wildlife Troopers last week issued Gerondale a summons to appear in court on Feb. 3 to be arraigned on a misdemeanor…

Protesters take anti-SOPA campaign to Manhattan offices of Schumer and Gillibrand
'The future of the NY tech community is in jeopardy,' the group states Protesters will be asking Schumer and Gillibrand to withdraw their sponsorship of the legislation, Rasiej said, “or tell us specifically under what circumstances they would vote yes for PIPA taking… Sen. Patrick Leahy, the sponsor of a controversial Hollywood-backed copyright bill, has bowed to public…

Internal Homeland Security documents describing specifications for border-crossing scanners, which emit gamma or X-ray radiation to probe vehicles and their…

Ron Paul on Fox and Friends

Ron Paul on Fox and Friends

Department of Homeland SSecurity Freaks Out Seniors and the Disabled

Leaked:US letter to Spain warned of punishment for not passing a SOPA-style law

US Threatened To Blacklist Spain For Not Implementing Site Blocking Law 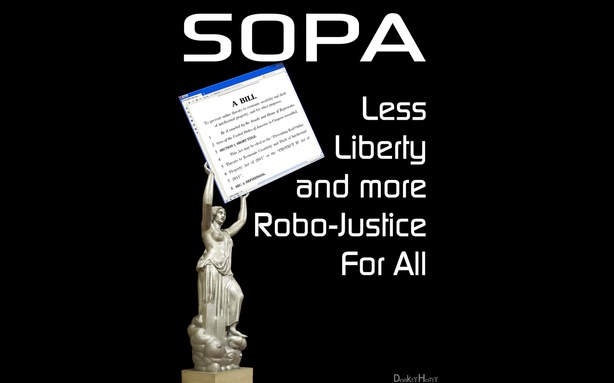 In a leaked letter sent to Spain’s outgoing President, the US ambassador to the country warned that as punishment for not passing a SOPA-style file-sharing site blocking law, Spain risked being put on a United States trade blacklist . Inclusion would have left…

Press conference coming up at 4:30, live on KING5.coSeattle police officer who was found shot hours after his arrest for alleged possession of crack cocaine, has died.

Officials at Harborview Medical Center confirmed the officer died of his injuries around 3:30 p.m.

The officer was identified 50-year-old Richard F. Nelson. He was booked into the King County Jail at 4:16 a.m. and released…

(AP) — Officials said Saturday they believe the latest earthquake activity in northeast Ohio is related to the injection of wastewater into the ground near a fault line, creating enough pressure to cause seismic activity.

Patrick Conway replied to The One's discussion Time to Pay, Time to Collect.
"Huh?!"
1 hour ago

"I’m not defending this just putting it out there.  I’m open to the unknown and…"
8 hours ago

"@Patrick Conway: Yes sir and you’re correct.  Most people have maybe one or two can…"
9 hours ago

"I’ve been seeing this and it’s very freemasonry and creepy.  How did Lockwood get…"
9 hours ago

For a refresher: Miles Guo is a Chinese dissident billionaire who managed to escape the CCP, and…See More
13 hours ago
0 Comments 0 Favorites