This Wed night on the MnRTV Live Show we have returning guest Illuminati expert author researcher  Fritz Springmeier as we get his take on the US Election 2016.  Are these elections rigged by the hidden hand? Hillary Clinton is a puppet of the Illuminati! Is Donald Trump a man fighting the New World Order or is he controlled by them also. Fritz will be discussing this as he has done deep research into this and what the outcome of the election coming up next week! What does it mean if Hillary…

Huma is in trouble: New emails tied to the FBI’s Clinton inquiry were discovered during the investigation into Anthony Weiner’s sexting… Check the Donald’s tweet from 2015! http://investmentwatchblog…

Huma is in trouble: New emails tied to the FBI’s Clinton inquiry were discovered during the investigation into Anthony Weiner’s sexting… Check the Donald’s tweet from 2015!…

Stop VOTE FRAUD! HOW TO Protect YOUR Vote!

BREAKING: Obama’s In HOT WATER…Reporter Exposes New Corruption, STUNS America!Hillary must be going down, it appears the MSM are struggling by pretending to become "reporters" again....lol, they're g…


Hillary must be going down, it appears the MSM are struggling by pretending to become "reporters" again....lol, they're going down next!!…

US Wants to Use Offensive in Mosul, Raqqa to 'Deal a Reputation Blow to Russia' So, all you US soldiers fighting in that region; the US Government is risking your lives just to look good! t/y Michael…

US Wants to Use Offensive in Mosul, Raqqa to 'Deal a Reputation Blow to Russia'

So, all you US soldiers fighting in that region; the US Government is risking your lives just to look good! t/y Michael Rivero

"In the current situation,…
Continue

The righteous shall never be removed: but the wicked shall not inhabit the earth. — Proverbs 10:30 (KJV)

The righteous shall never be removed: but the wicked shall not inhabit the earth. — Proverbs 10:30 (KJV) 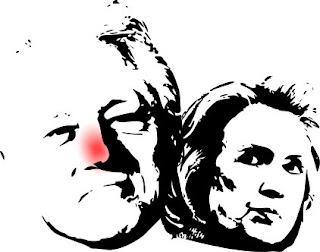 Bubbu the Red-Nosed Rapist
Had a very nasty wife
she cussed him out each evening
what a very crappy life.

Here are a couple of things to consider when posting here.

All postings whether blogs, videos or photos should have a relatively short title that gives a general idea of the content.

Also, it is against copyright laws to copy articles from other sites. Instead, you should take a short quote between quotation marks, give a link to the source and add you comments.

Roger Stone: Globalists Deserting Hillary Hillary has too much baggage

Hillary has too much baggage for globalists, says Stone

It's been 18 months since We've asked for Donations, because we do…

The West’s policy towards Syria cannot be described just as one of “double standards” anymore, Zakharova told journalists during the briefing, saying that “there is an attempt to directly assist the militants and terrorists.”

“Perhaps the last place you’d expect to find John Stubbs or Ricardo Reyes, two former George W. Bush administration officials and ardent Republicans who retired from politics years ago, is at the Democratic National Convention in 2016.

And yet here they are, posted up in a rented house in downtown Philadelphia, tirelessly promoting their grassroots organization, R4C16, which…

Of how much sorer punishment, suppose ye, shall he be thought worthy, who hath trodden under foot the Son of God, and hath counted the blood of the covenant, wherewith he was sanctified, an unholy thing, and hath done despite unto the Spirit of grace? — Hebrews 10:29 (KJV)

A Retired FBI Agent Addresses James Comey on the Hillary Clinton InvestigationSorry, but NO SIR, MS Clinton was not merely careless or extremely careless. She was not even negligent or grossly neglig…

Sorry, but NO SIR, MS Clinton was not merely careless or extremely careless. She was not even negligent or grossly negligent (as the statute requires). Hillary Clinton was knowingly purposeful in her decisions and actions to set up a server under her exclusive control and possession in order to control what information was available to the American public and Congress regarding her actions as…

The Presidential candidate of the U.S. Democratic Party, Hillary Clinton, is a longstanding and ardent proponent of the U.S. establishing a “no-fly… If one takes a look at the world today they will see the scars of globalism written all over the pages of the sold out press corps of the world as well as the sanctioned decline of the international community. After decades of a concerted effort to use unelected regulatory officials to dictate the…